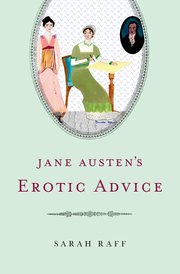 Ever since the publication of Deidre Lynch’s collection Janeites: Austen’s Disciples and Devotees (2000), Austen criticism has turned away from interpretations of the novels, celebrations of style, and commentary on such literary techniques and forms as free indirect discourse and the courtship novel. While biographical research remains central, the critical focus has shifted to fan culture, film and digital media, Austen’s influence on so-called chick-lit, and her position in the English heritage industry and the global marketing of romance. The importance of Jane Austen’s Erotic Advice, a work of literary criticism cannily titled as a self-help book, derives from Sarah Raff’s linking of stylistic, formal, and literary historical considerations, with a focus on Austen’s letters and a reconceiving of her fandom.

Raff argues that Austen herself created the phenomenon of “Janeism,” an “exorbitant devotion” for the author that goes beyond what is normal in literary reception (1), precisely because “the author’s godlike care” extends to the reader’s love life (121). Austen establishes the position of readerly submission to authorial will through the speech-act of the “generalization” (1). In an account that elaborates on Geoffrey Bennington’s theorization of sententiousness, Raff terms generalizations “portals from the fictional world into the real world” (6). Generalizations resist fictionality, since they are subject “to the true/false distinction” (15). The reader’s acceptance of a generalization serves to eroticize her relationship to Austen, in the manner of the “‘pedagogical love’” in the plots of the novels (7). Like some of her heroes in relation to her heroines, Austen becomes Pygmalion to the reader’s Galatea. The didactic novel form that Austen inherits is simultaneously an erotic form, “for didacticism . . . is a mode of seduction” (7–8). Even while Austen critiques didactic fiction, her “works bring to extravagant culmination . . . the eighteenth-century ambition to intervene in the reader’s world” (164). Raff provides a psychoanalytic explanation for the operation of the generalization: the seductive power of the novel depends on transference from the love of knowledge or, in Lacanian terms, from love of the “subject supposed to know” (Lacan, qtd. in Raff, 17). [End Page 251]

Raff’s focus on Austen’s construction of the author as both “cupid and lover” to the reader (132) results in a different grouping from the conventional Steventon/Chawton division of the novels based on the dates of the original drafts. Raff argues instead for the importance of publication date, so that Mansfield Park now goes with Sense and Sensibility and Pride and Prejudice, while Northanger Abbey fits in with Emma and Persuasion (2–3). In support of this new grouping, she provides strong evidence that Northanger Abbey was heavily revised after Henry Austen repurchased the copyright from Crosby & Co. in 1816. Raff claims that “Only in the three last-published novels does the reader’s relation with Austen’s authorial persona retain primary importance” (8). She attributes Austen’s “mid-career shift” to the 1814 letters of marriage advice written to her niece Fanny Knight (3), in which Austen adopts an “oracular tone” (67) in writing “as if she were the author to Fanny’s character” (4).

The “Janeite” is in many respects the heir of the eighteenth-century female Quixote. Quixotic narratives rely on the generalization, the speech-act that imposes fiction on life, to the confusion of a character who fails to grasp generality. Despite the didactic novelist’s claim to avoid, through recourse to instructive generalizations, the dangerous effects of fiction, “generalizations in fact encourage the confusion between fiction and reality that plagues the quixote” (119). The female Quixote, along with the Janeite and the tutorial subject of matchmaking, is reduced to “the condition of erotic impressionability that antinovel discourse deplored” (98). Raff demonstrates that the matchmaking scenario in Austen’s life and works has a literary source in Samuel Richardson’s Sir Charles Grandison, in which the eponymous hero transfers the love of his ward, Emily Jervois, from himself to his virtuous double, Sir Edward Beauchamp. In this scenario, “the…